Hissene Habré, the former dictator of Chad, will stand trial for atrocities before a special court in Senegal on July 20 after a long campaign led by Bertha Justice Initiative partner lawyer Jacqueline Moudeina and the Chadian Association for the Promotion and the Defense of Human Rights (ATPDH), together with Human Rights Watch.

Now, a new short documentary by Spanish director Isabel Coixet, narrated by French actress Juliette Binoche, and produced with the support of the Bertha Foundation, shines a light on a Chadian prisoner whose sacrifice inspired the survivors to undertake what the Toronto Globe and Mail called “one of the world’s most patient and tenacious campaigns for justice.”

In “Talking about Rose,” Rose Lokissim’s cellmates describe a strong woman who kept up the prisoners’ morale in their overcrowded, putrid dungeon. She shook off her own torture, but became indignant when others were mistreated or executed. Risking her life, Rose noted these abuses and smuggled messages through to relatives. Ultimately, Habré’s secret police– the feared “DDS” – learned of her actions and killed her in 1986.

Among the DDS files Human Rights Watch uncovered in 2001 was the police report of Rose’s last interrogation. Rose’s questioner wrote that she didn’t care what happened to her. Even if they killed her, she said, “Chad will thank her and history will talk about her.”

Twenty-nine years after her execution, Rose’s words are coming true. As Juliette Binoche says in the film, “Rose’s chosen mission, for the world to know the truth about Hissène Habré’s prisons, is finally being achieved.” Habré is standing trial. And history is indeed talking about Rose. 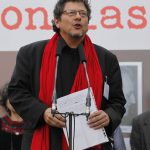 Reed Brody
Counsel, Human Rights Watch, who has worked with the victims of Hissene Habré since 1999