Ten of us were crowded around a small conference room table, as a young black man recounted a story of how he was arrested by the police for no reason. He was on his way to school to take an exam, and the police stopped him, without explaining why. He was taken to the police station for 24 hours, where officers ferociously beat him.

He paused in his telling and began to cry. The room, of mostly young black youth, were visibly moved and angered. This young man, Mzukisi “Parraddox” Ndabeni, was recounting an experience he had in a South African township, to a room full of young African Americans, but it was no different from the daily experience of many young people of colour living in the United States.

Mtzukisi—or Parra, as he prefers to be called—was in New York City as part of the second phase of an artistic and cultural exchange that Hannah Loewenthal and I, along with the New York-based organization Found Sound Nation, have developed and facilitated over the last two years. The project, Hear Be Dragons, has brought together two groups of aspiring young musicians, producers, poets, actors and dancers from the township of Nyanga and the Brooklyn neighborhood of Williamsburg. Over the course of 2015, these young people shared their experiences and stories of their neighborhoods through the medium of sound, recording found sounds from each neighborhood to create music tracks, sonic stories and sound pieces, and exchanging their impressions and thoughts through WhatsApp and Facebook.

We selected three South African participants to make the trip to New York City: Nozuko Tshisa, Zephaniah Ntshekisa and Parra. These young people had never left South Africa before, and we were nervous about the many things that could go wrong and the task of wrangling young people in a monster of a city like New York, as well as the challenge of putting together a professional and stage-worthy performance in less than a week. Apart from the initial battle of obtaining visas for our three participants, however, we could not have dreamed up a better group.

Over the course of the Hear Be Dragons program, we had encouraged our transatlantic participants to communicate with one another through social media. One of the biggest aims of this project was to use mobile devices—which have become so ubiquitous, like additional limbs without which we could not survive—to reconnect urban youth to their immediate surroundings and share those experiences using the very same devices that so often serve to disconnect us.

We soon discovered that there was something about the process of sharing one’s thoughts and experiences only through the sonic medium that created a heightened sense of intimacy. Perhaps it was the voice notes that these young people from two completely different places had exchanged late at night – one from a tiny shack in the dense township of Nyanga, and the other a crowded Bed-Stuy apartment. Perhaps it was the intimacy of strangers, the willingness to share intimately with one another, precisely because they did not really know each other, and were not having to meet face to face in daily life. There appeared to be a sense of safety in technology, but also a sense of connection. The youth maintained the connection of the human voice, but with the safety of not having to stand right next to that person. This sonic exchange brought these two groups of urban youth together, and they were immediately open, fascinated and obviously taken by one another, which made the collaborative process of creating work together incredibly inspired.

Over the course of one week, in collaboration with New York City-based musicians and puppet artist Karen Zasloff, we developed an interdisciplinary work, using the sound pieces that had been created by both the South African and American participants, and featuring live dance, spoken word, and vocal performances by six of the Hear Be Dragons participants, as well as a live band, musically directed by me and Andrew Orkin – a young South African musician and composer living and working in New York. This process turned out to be not only a collaboration between two groups of aspiring artists from South Africa and New York City, but also a collaboration between professionals in the same field, sharing their creative expertise to produce a truly collaborative and cross-cultural work.

“Kids are getting shot in Brownsville,

While artisanal horseradish sells for $74 in Williamsburg

Brooklyn — the tale of two boroughs

Wine and guns in parallel worlds.”

In front of a packed house, Vanessa shared a powerful spoken work piece about what it feels like to grow up in the rapidly gentrifying neighborhoods of Bed-Stuy and Williamsburg as a young black woman, struggling to access high-quality educational opportunities. Parra and Zee burst onto stage with a powerful Xhosa rap piece about taking their future into their own hands as the “born free” generation of post-apartheid South Africa, while Nozuko’s voice pierced the night with a haunting rendition of a South African folk song, a call from the ancestors to those passed on, followed by a melancholic monologue reflecting on the experience of many black South Africans as they transition from rural upbringings to the country’s densely populated metropoles. By the time the performers stood to take a bow, the full house at National Sawdust rose to their feet with whoops and cheers, rewarding these incredibly brave and talented young artists with a standing ovation.

Hannah and I are hugely proud of this group of young people, particularly our young South “ambassadors,” for their commitment, generosity and leadership. Each of them worked incredibly hard to meet the demands of making a new work within such a limited time. They were fully dedicated to harnessing their own creativity and craftsmanship. They were uncompromised as individual creatives, while wholeheartedly supporting one another throughout a demanding week.

Apart from the creation of a performance piece, and the exchange with the US Hear Be Dragons participants, we also facilitated an exchange with alumni students of The Academy, a program of the New York City based arts institute, Urban Arts Partnership. The Academy is a program rooted in social-justice that functions as a third space – neither home nor school – where students participate in advanced art programs, leadership development trainings, and receive college and career resources and training. Designed as an environment of excellence, the Academy fuses the creative arts and youth development to guide students in creating a vision of themselves in the future. The staff from UAP and I co-facilitated a workshop, and assisted in the composition and production of a track, based on themes of social justice and the power of youth protest – particularly looking at recent movements such #FeesMustFall in South Africa and #BlackLivesMatter in the United States.

For our South African participants, the journey to an entirely new city with new people has created a major window and provided a perspective on their lives “back at home.” Perhaps Zee captured this feeling best:

“I am more interested than ever to research more about my own cultural background connected to music and to grow my talents in my homeplace. I feel it is something unique I can share with the world. I didn’t realize this in such a big way until being in New York where I felt appreciated in a way I hadn’t experienced before. I guess we are all looking for ‘something new and something different.’ I felt the same way being exposed to new talent in New York.”

This was a very meaningful exchange for both groups, as they soon realized the similarities of their experience as young people of color, from disadvantaged communities – even though they come from different and far-away lands with distinct histories. The power of this exchange and the sharing of these experiences was no more self-evident than at the first meeting between the three young people from South Africa and The Academy alumni, when Parra shared his story of wrongful arrest and assault at the hands of South African police – for our young American participants, it could have been Staten Island, Ferguson or Sanford, the stories of Eric Garner, Mike Brown, or Alton Sterling. Everyone had been too tragically close to these episodes in their own lives. 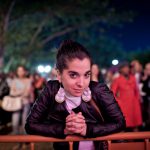