Bertha Foundation was honored to be in Park City, UT for the 2017 Sundance Film Festival where nine Bertha-supported films screened in the festival’s world and U.S. documentary competitions. These included Strong Island, which took home the U.S. Documentary Special Jury Award for Storytelling, Last Men in Aleppo, which won the World Cinema Grand Jury Prize for a documentary, and Winnie and Machines, which won World Documentary Grand Jury prizes in directing and cinematography, respectively. Bertha-supported Sundance films also included Whose Streets; Plastic China; Nobody Speak: Hulk Hogan, Gawker, and Trials of a Free Press; 500 Years; and Trophy. 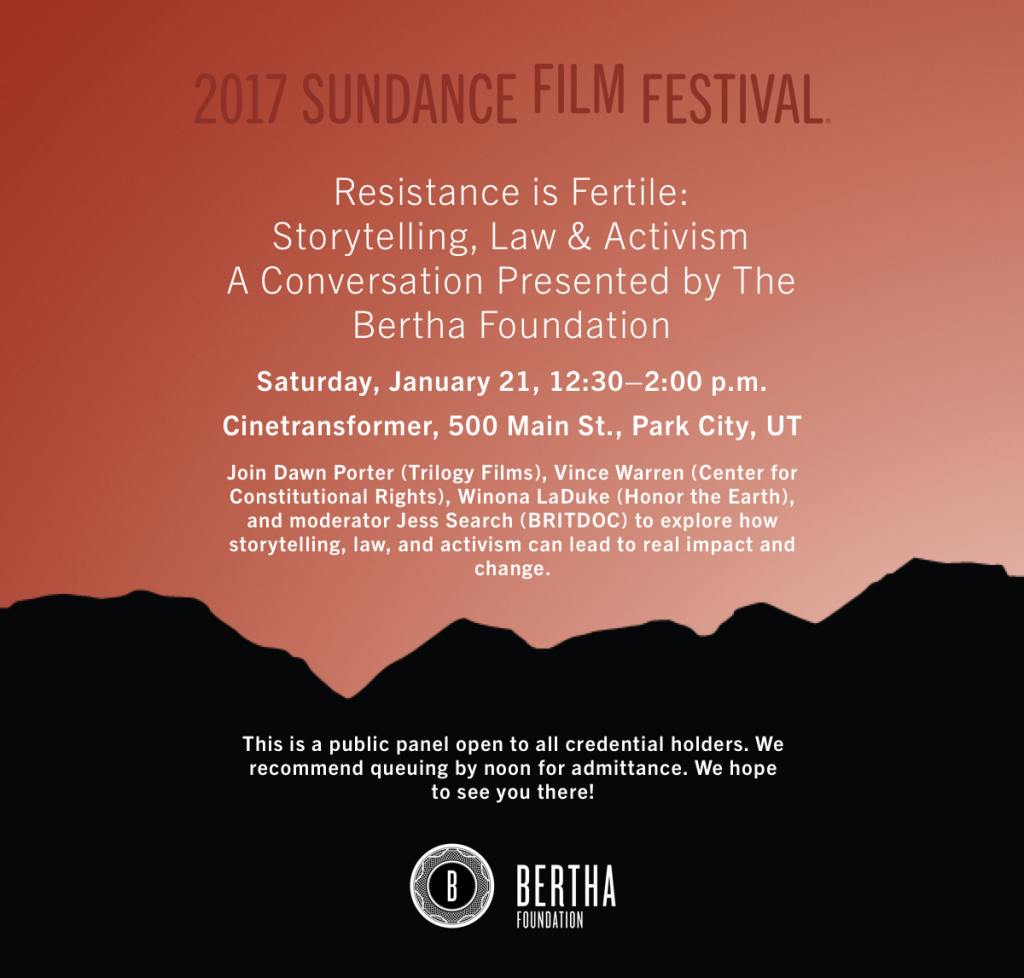 Additionally, Bertha Foundation hosted a panel for Sundance attendees, discussing resistance in the U.S. today and highlighting the Bertha Foundation Theory of Change, which is founded on the belief that when activists, storytellers and lawyers work together on an issue, big change can happen.  While powerful on their own, if given the resources to connect and collaborate, their combined power is much great than the sum of its parts. The panel, titled “Resistance is Fertile: Storytelling, Law & Activism,” was moderated by BRITDOC’s Jess Search and included storyteller (and lawyer) Dawn Porter, director of Trapped and Bertha BRITDOC Connect Fund grantee Gideon’s Army, Native American activist Winona LaDuke, founder of Bertha grantee Honor the Earth, and lawyer Vince Warren, Executive Director of Bertha Justice Initiative partner organization, Center for Constitutional Rights. We’ve compiled some highlights from the panel for you here, in the hopes that we can continue a dialogue about not only what it means to resist, but also, as Winona LaDuke said, to “keep going where you’re going, and [not] get caught into this notion that you are a resistor. Because we have vision, you know? They don’t have vision.”

On the importance of recognizing the structures and systems at play:

Dawn Porter: “It was very informed by the work I did on the abortion film and seeing how the structures literally worked to close clinics… And that those same tactics, gerrymandering, the same voter suppression rules, are being passed around from state to state. They are not reinventing the wheel: they are seeing what works and then passing it around. So I felt like, I now have training in understanding those patterns, and I wonder what it will look like to apply that lens to this particular issue.”

Winona LaDuke: “My theory is pretty much that you have a predator economy. You have people who have the remaining water, who have the remaining whatever it is: natural gas or oil or uranium, and all that the predator, that the extractive economy wants, is that, and we’re in their way. And nothing has changed the system. No one has changed the system. And that’s what we have to do here – systemic change, and [change] your levels of consumption and where it’s coming from, and the choices that are made because of it. And without that, you’re gonna continue to face one insane process after another. Or one insane director after another.”

Winona LaDuke: “I have long subscribed to the strategy that you have to build your base. You have to be strong in your communities, and then you have to work with allies everywhere else who will deal with Washington, who will deal with those federal pieces, but if your base is not strong, you will go nowhere. That’s how I was raised and that’s my experience: my community.”

Vince Warren: “Everybody thought that the house was on fire on November 9th and it wasn’t. The house is going to be on fire, and it is going to be on fire this year, but the difference is that if your house is on fire now, you think tactically.  Get out, where’s the fire extinguisher, where’s the water?  But, if you know that your house is going to be on fire six months from now, or a year from now, or that it’s going to be under siege over the next four years, you have to think strategically, and I completely agree with Winona that building that base is important… The idea is that lawyers are not the first ones out of the gate, we’re not the ons leading the strategy… When it comes to pipelines, when it comes to Ferguson, when it comes to some of these other issues, you can’t be the first people in the room.  You have to be able to show up, and you have to ask the one question that’s important: ‘How can I help?’ And don’t expect to get that answer immediately… You have to keep coming back and keep having that conversation.”

On intersections of law, organizing, and storytelling:

Dawn Porter: “I’ve seen people who are incredibly powerful activists say, ‘Nope! The lawyer said no.’ Because why? You know, because why? So one thing I’ve been able to do is push back on the lawyers and say, tell me why? Tell me how this violates the privilege. And then once you actually start to have people articulate their issue, then you can have a conversation, but if you stop at the blanket ‘no,’ you’re not gonna get anywhere, unless you do what a lot of filmmakers do, which is unfortunate, and they go around the lawyers. And that’s not good either, because you can then violate. You can expose clients and things that are against their interest.”

Vince Warren: “Filmmakers will work with activists and will work with lawyers, and will say, ‘that stuff that you’re doing is great, that’s not the story that I want to tell.’ Activists will work with filmmakers and say ‘that is a fantastic story, but that is not helping me with my people and my advocacy.’ Lawyers will work with organizers and say, ‘that is really, really great but we are gonna lose the case if you go in and say that.’ That just happens, right? But, rather than just sort of throwing our hands up and saying, okay lets not collaborate, the real magic for the next four years is about investing in that collaboration… The idea of, what does this partnership look like? …I think it’s also cutting edge in terms of how we think about our visions, our collective and individual visions and where they merge, cause that’s the thing that keeps us apart. Our visions are so strong and so clear on what we want to happen, that sometimes, when other folks cant buy into it immediately, then we say we don’t want to work with them.”

Winona LaDuke: “An essential part of the strategy though, is that we need the national people to see what we’re doing. Because we have been struggling in places where nobody has been looking, because it’s not convenient. It’s far out. Nobody knows where the hell that reservation is… So be there, be present, and then there are a lot in all of our communities that are facing this and they are very strong people and those people need to see the light of day and they need your protection. That’s what they need.”

On what is to come:

Dawn Porter: “The dream is to live where you’re working and to really be immersed and we don’t always have that luxury. But we need more voices than ever. I can’t do everything I want to do. I shouldn’t tell every story, obviously! There should be so many people of different backgrounds and perspectives so that we are flooding the information ecosystem with good information. With stories about real people told from a curious and empathetic point of view.”

Vince Warren: “I think over the next four years it is clear to me that we are gonna be taking leadership from queer folks, black and brown folks, women folks, poor folks… Because, when we think about structures as opposed to issues, the people that experience those structures in intergenerational ways are the people that are the most marginalized. And the new generations of folks that are coming up are so powerful. I grew up and we had separate identities. The young folks that are coming really are living multiple identities and refusing to shed any one of them for any particular political reason and it’s one of the most powerful wonderful things that I have seen.” 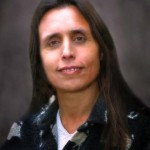 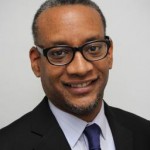 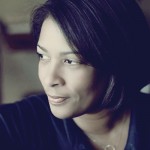