Mbekezeli Benjamin is currently a Legal Advisor at Be Just partner organization Equal Education Law Centre. He completed a Be Just Fellowship at the Socio-Economic Rights Institute of South Africa (SERI) from 2014 to 2016.

“How do we as public interest lawyers use the law to break down structures of power, and how do we use the same law to reinforce these structures of power?” was the question asked by Equal Education Law Centre‘s Nurina Ally to open the second annual South Africa Bertha Convening. Held August 24-26 in Muldersdrift, on the outskirts of Johannesburg, this year’s convening had the theme of defining the role and function of a social justice lawyer in 2016.

The theme of the Convening was to interrogate what it means to be a young lawyer working for the cause of social justice in South Africa in 2016, and how that role and function is played out in a loud and robust democracy – particularly in the present political moment. Young people in South Africa are beginning to question some of the key agreements struck in the negotiated settlement that facilitated the country’s transition to democracy: questions about land ownership and economic participation that still excludes the majority of the population; questions about the meaning of human rights in the face of grinding poverty and the highest level of inequality in the world; and questions about professional identity in a legal culture that is elitist and exclusionary. Young people are hard at work seeking the answers to these questions, and the new generation of social justice lawyers that form the network of Be Just Fellows in South Africa are no exception. It is in this context that the Convening brought together an eclectic mix of lawyers, young and old, all engaged in their own way in a new culture of activism that further blurs the distinction between the legal and the political.

Lessons from then and now: lawyers in conversation

The Convening welcomed two retired Constitutional Court justices, Justice Zak Yacoob and Justice Yohann Kriegler, who each spoke about their own experiences of social justice lawyering under apartheid, and what it meant to be a lawyer then and now. Speaking on the same panel, LRC National Director, Janet Love, drew comparisons between trade unions versus capital and trade unions versus the unemployed to illustrate the difficulties in drawing inflexible battle lines. SERI’s Director of Litigation, Nomzamo Zondo, added that we should always work hard to create spaces where ordinary people can articulate their issues in the face of powerful forces such as the state or business.

A recurrent theme throughout the discussions at the Convening was an acknowledgment of the limitations of the law, and that modern social justice lawyers have to rely on multiple skills and approaches in the struggle for social change. Today’s challenges demand political savvy drawn from political activism, as well as creative storytelling skills drawn from media activism.

Relying on the experiences of three esteemed activists who have successfully employed an interdisciplinary approach to their legal work, the next discussion panel challenged fellows to think of themselves as more than lawyers. S’bu Zikode, a renowned activist and the president of shackdwellers movement Abahlali Basemjondolo, spoke about the power of organizing. Lwazi Mtshiyo, a current Be Just Fellow at SERI, spoke of how he has brought the skills acquired from working in community activism and research to his legal practice. Mandisa Shandu, the Director of Ndifuna Ukwazi’s Law Centre, spoke about the function of a lawyer, the law and cases in a broader political struggle led by ordinary people.

Transformation and building an identity

Be Just Fellows are emerging lawyers starting their careers in public interest law, working in communities and in support of social movements. At this early stage most Fellows (in South Africa, at least) are still grappling with a professional identity that strives to live the values Justice Yacoob highlighted but in a dominant legal culture that is elitist, exclusionary and that often reinforces oppressive power structures of racism, sexism and other bigotry. There is therefore a movement afoot to transform the legal profession inherited from apartheid – that is mainly comprised of white men – to a profession of the future that is reflective of the demographics of the rainbow nation and represents its founding values. It is in this context that a panel discussion on transformation of the legal profession took place.

The Convening welcomed three distinguished speakers who each started off their careers engaged in commercial practice, later moving on to a public interest practice, but who now stand at different points within the broader definition of a ‘lawyer’. The first, Tembeka Ngcukaitobi, an advocate practising at the Johannesburg Bar, spoke about how the current environment is exciting for public interest lawyering as the state is grappling with having to convert the constitutional promises of the fulfillment of socio-economic rights into reality.  Charmika Samaradiwakera-Wijesundara, a young legal academic from Wits University, was next to speak and questioned the very idea of transformation and our understanding of it. Last to speak was CALS Deputy Director Lisa Chamberlain, who explained that for CALS, transformation means taking positive steps to redress the past and build a diverse future.

A frank and open discussion about transformation within the public interest legal sector in South Africa ensued among the Fellows. The conversation touched on a number of issues such as organizational culture, the paucity of black and women leadership in the sector and how these impact on Fellows’ confidence to lead these organizations in the future.

These discussions reverberated across the sector and provided inspiration for positive action for social change. In the following week, at the sixth annual Public Interest Law Gathering (PILG) a memorandum of demands from young black lawyers – including many Be Just Fellows and alumni – was presented to all directors of social justice organizations present, together with a call for a consultative meeting to discuss these and other lingering issues of transformation within the public interest legal sector in South Africa. 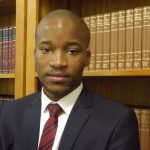