The Magnum Foundation is a non-profit organization expanding creativity and diversity in documentary photography. Through production grants, intensive mentorship programs, and labs for experimenting with emerging technologies, we partner with socially engaged imagemakers to explore new models of storytelling.

The Magnum Foundation’s Photography Expanded initiative provides space for socially engaged and community-based image-makers to meet, exchange ideas, and learn about emerging digital tools and platforms for increasing the impact of their work. Each year we hold a series of labs that culminate in a free, full-day public symposium centered around trends at the forefront of creative social practice. With the generous support of the Bertha Foundation, this year’s Photography Expanded Symposium brought together over 200 photographers, artists, and activists on June 8 around the theme of collaboration.

At the symposium, a range of creative practitioners led presentations and discussions exploring collectivity, authorship, and participation in documentary practice. They inspired deep thinking on what it means for photographers, organizers, and activists to partner with other makers, their subjects and constituents, and the public.

Starting with questions not answers. Video by Mengwen Cao.

The day kicked off with three interdisciplinary teams that Magnum Foundation supported this past year to collaboratively develop projects on the topic of religion. The teams consisted of photographer and artist Kameelah Janan Rasheed and creative technologist Corey Tegeler, exploring the Black religious life in the United States; photographer Oscar B. Castillo and writer Karim Baouz, documenting Islam within French society; and photographer Yael Martínez and graphic artist Orlando Velázquez, illustrating indigenous Mexican spirituality. In each case, we saw how collaboration greatly expanded the potential of photography as a medium to challenge the traditional perception of what documentary photography is and what it can achieve.

“We’re moving in a direction where we’re really thinking about what it means to tell a multi-layered and textured story,” said Kameelah, “and I’m really excited that Magnum Foundation is funding work like this that allows people to think about the boundaries of genres and the ways that pushing against those boundaries can allow us to tell better stories.”

Through interdisciplinary partnerships, new artistic forms can emerge that would not have manifested within a single mode of practice. Yael Martínez and Orlando Velázquez’s work, for instance, merges photographs and drawings to create layered composites that illustrate both the physical and metaphysical components of ceremonies performed by ancestral communities in Mexico.

Three members of the art-activist collective The Illuminator discussed their work of creating public visual interventions to incite social and political action. The Illuminator uses image projection in public spaces to call attention to crises of our time, confronting the public on critical movements for a more just, peaceful, and sustainable world. They have staged hundreds of projections, transforming the streets from spaces of passivity and transit to sites of engagement and dialogue on both global and localized issues such as police brutality and gentrification in Chinatown.

“I tend to think of The Illuminator as a tool of hacking the urban environment,” said Grayson Earle. “And what I mean by that is it affords us some interesting opportunities to inject discourse into visual space that otherwise is not meant to be there and allows us to outpace or creatively circumvent our enemies, people who are trying to uphold the status quo in the visual environment.”

This idea of subversion was echoed by artists Heather Hart and Moreshin Allahyari, who discussed with immersive media technologist Opeyemi Olukemi the building of infrastructures that enable cooperation. What does collaborative practice look like outside of the studio – out in the neighborhood? “Things like land trusts, educating our neighbors, knowing people in our neighborhoods, saying hello to people, talking to people, and having each other’s backs. That’s an alternative economy right there,” noted Heather when speaking about work that disrupts systems buttressing racial inequality and colonialism.

Moreshin spoke to the potential for activism in the digital space, too. “It is very easy to collaborate and talk about dialogue when you all agree. I’ve been thinking about how to challenge that space in some ways,” she said.

Echo chambers and social bubbles, both digital and physical, are an increasing factor in art-activist practice. For Interdisciplinary artist Tiona Nekkia McClodden, who spoke with the Artistic Director of Creative Time Nato Thompson, it comes down to intentionality: who is the work being made for? Tiona, who centers her work around themes of memory, nostalgia, and time in the Black diaspora, shared:

I’m interested in presenting that work to the community first. All the works that I’ve ever created in Philadelphia have been shown to the communities first at the same high level that they would be shown in museums or galleries. They are literally the community that I’m looking to present and I want to make sure they understand the gestures that I’m making within the work, so that even when it comes to a New York or global audience, if there is a situation where they do not understand, it doesn’t bother me because the people I actually make it for get it. I do that because there are a lot of artists who do the opposite. There is a lot of art out here that is pulling from communities and those communities have never seen themselves in that work. And I’m very much against that kind of practice.

In a panel about radical listening and participatory practice, artist and organizer Sol Aramendi spoke about listening as a responsibility that should precede and precipitate action. “One thing is to come out of your privilege, another thing is listening and being prepared to do something about it, and that is very difficult when you have a lot of collaborators and everyone has an opinion.”

Looking at collaborative practice from various angles – innovation in collaboration, organizational support for collaboration, collaboration between different disciplines – we found ourselves looking back as much as we looked to what’s next. Collaboration has long been a part of photography. Magnum Foundation president and photographer Susan Meiselas presented in conversation with photographer and educator Wendy Ewald their ongoing project that maps collaboration throughout the history of photography, created through a participatory process with input from viewers. “We see it as a dialogue that is going forward– it’s reaching backward to go forward,” said Susan.

What emerged through our symposium on collaboration was a theme of reflecting on and reevaluating historical frameworks and long-held, dominant narratives. We’re inspired to look next at ways that artists are reading visual archives against the grain to create new works that challenge conventional, accepted histories. 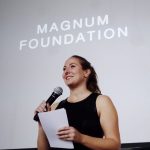 By Simone Salvo, Manager of Communications and Events at the Magnum Foundation