We gather inside a haima, a Sahrawi desert tent stitched together from thick cotton cloth provided by the Red Cross and lined on the inside with a patchwork of colorful materials. Outside it is over 40 degrees Celsius (104 F) and the temperature is still climbing. Inside, the air is still with expectation. As we enter, a group of Sahrawi women and men greet their visitors, which include international attorneys, activists, filmmakers and journalists; they have awaited this moment for a long time.

We are at the Western Sahara International Film Festival (FiSahara), an annual event that combines entertainment with human rights advocacy in one of the world’s most remote locations: the Sahrawi refugee camps in the heart of the Sahara Desert, in Southwestern Algeria.

For its 12th edition, held April 28-May 3 in the Dakhla refugee camp, the local community has performed an unbelievable feat, hoisting an entire film festival from the sands of the desert, including two multiplex-sized movie screens and dozens of tented side events.

FiSahara’s evening film screenings are packed with local families and international visitors, and daytime roundtables address issues in the context of the films watched. Concerts in sand dunes, a traditional cultural parade and fair, clown acts in schools and on festival grounds and filmmaking workshops provide hours of entertainment and skill-building for refugees and visitors over the course of four days.

The festival’s aim is to raise international awareness about the forgotten conflict in the Western Sahara and to make lasting social change, so it brings human rights defenders, filmmakers and legal advocates who can help make a difference in the Sahrawi struggle for human rights and self-determination. Each year brings a new theme that reflects a part of this struggle, and this year it was Universal Justice.

Our two-year long partnership with Bertha Foundation stems from a shared vision – using film to bring human rights issues both from and into communities facing injustice, underrepresentation, and limited access to resources that promote awareness and action. Our collective experiences are continuously brought into discussions about how film and media activism can lead to social change through concrete film projects and campaigns.

Many Bertha supported documentaries have screened at our festival, furthering their mission of cross-collaboration among Bertha grantees. These include Rick Rowley’s 2013 Academy Award nominee Dirty Wars, which follows investigative reporter Jeremy Scahill as he exposes covert operations from Afghanistan to Yemen, Somalia and beyond.The Square, in which Egyptian-American documentarian Jehan Noujaim depicts the ongoing Egyptian Crisis and most recently Beats of the Antonov and Granito: How to Nail a Dictator.

Bertha Foundation not only supported these films but also organizations such as Paco de Onis and Pamela Yates’s Skylight Pictures, a company committed to producing artistic, challenging and socially relevant independent media and media strategies on issues of human rights and the quest for justice. They presented a master class at this year’s festival and their film Granito won the first prize: the White Camel Award, where the reward was indeed a live white camel.

Bertha grantee WITNESS also played a role at the festival – providing a training for Sahrawi Human Rights Activists. Activists at the festival received three weeks of training on how to film, edit and share human rights videos. Among those present was the Sahrawi human rights defender and former political prisoner Mohamed Daddach, who spent 25 years in prison – 14 under the death sentence – and is known as the Sahrawi Mandela.

It is this interweaving – of filmmaker with activist, facilitator with community – that makes FiSahara a proud and vibrant thread within the Bertha tapestry.

Sahrawis have waited almost 40 years to return home to the Western Sahara, a resource-rich territory situated between Mauritania and Morocco that was first occupied by Spanish colonists for 150 years and then invaded by Morocco and Mauritania in 1976 with support from Spain, France and the United States.

Categorized as a non-self governing territory, many refer to the Western Sahara as Africa’s last colony. Few people have ever heard of it. The United Nations Security Council each year postpones a vote on a final resolution to the conflict, which includes the celebration of a referendum on self-determination promised since 1991.

The Western Sahara’s natural resources, including phosphates and rich fishing waters, are illegally exploited by Morocco, international companies and the European Union, which benefits from a fishing agreement allowing its fleet access to Sahrawi waters. Sahrawis say that they obtain no benefit from this exploitation. Organizations such as Western Sahara Resource Watch provide activists with information about the latest campaigns to stop the pillaging.

Sahrawis are a nomadic people with roots in Berber and Bedouin cultures. There are also a large number of black Sahrawis, the majority descendants of slaves.

The Invasion and Genocide

After pillaging the Western Sahara and destroying local culture for 150 years, Spain withdrew in 1975-76 and allowed Morocco and Mauritania to invade. The brutal occupation, supported by the US and France, sent half of the population fleeing into exile while the other half remained under occupation.

FiSahara’s nooks and crannies are filled with moments that give the event its unique dimension and significance. One of these moments takes place inside that hot, packed tent.

There, a group of Sahrawis who survived the 1976 bombings are about to tell their stories for the first time to Manuel Ollé, a Spanish attorney who in 2006 helped Sahrawi family members of the disappeared file a case in the Spanish National Court accusing the Moroccan government of genocide against the Sahrawi people. The family members invoked a mechanism known as Universal Justice that gives jurisdiction to courts anywhere in the world to try cases of Crimes against Humanity regardless of where they are committed. Just days before the start of FiSahara, the judge in this case had indicted eleven Moroccan military officials on charges of genocide, and Interpol had issued red-code alerts for their arrest.

On the last day of the festival we tour Bertha-supported Abidin Kaid Saleh film school, where the first generation of Sahrawi filmmakers are not just learning to master a new art, but actually helping to define it.

Sahrawis often quote the African saying that “When an old person dies, a library burns down”. Sahrawi culture is primarily oral, and its survival through time depends on oral transmission between generations. Occupation and exile, threats to cultural survival, have separated Sahrawi families and made Sahrawi cultural transmission from elders to the younger generations a serious challenge.

FiSahara and the film school are supporting Sahrawi efforts to document cultural traditions and stories through film and are serving as tools for Sahrawis to create, share and enjoy their own cinema. FiSahara showcases Sahrawi student films, which have become an audience favourite. These films narrate simple stories about life in the camps with a complex backdrop of human suffering: separation, scarcity, uncertainty about the future. They are also authentically Sahrawi in their narrative and very different from the Sahrawi-themed films that have been made by filmmakers from elsewhere. FiSahara uses its network of partners to disseminate Sahrawi-made and Sahrawi-themed films internationally.

“Film has given purpose to my life, says student Mohamed Ahmed Habeim. “Through filmmaking I want to send a message to the world that we exist as a people”.

Among visitors to FiSahara this year was Bertha co-founder Tony Tabatznik. On the first day of the festival, as hundreds of people paraded in traditional dress, he observed a group of old men marching with fishing rods, a symbol of their past livelihood as fishermen when they lived by the Atlantic Ocean. The image of these land-locked men of the sea moved him deeply. “This is another Palestine, and nobody knows about it,” he said. “And that has to change.”

Ratner, whose Center for Constitutional Rights is involved in worldwide struggles for human rights and is also a Bertha grantee, reflected on his experience at the festival: “As I sat in the haima with the survivors and victims of the Moroccan bombings and with Nora from the Mothers of the Plaza de Mayo, I had a great feeling of hope. These brave people from two different struggles still fight for justice decades later; they have not given up their fight for a just world. Who we are we to lose hope? Rather, we must join them.”

FiSahara and the Abidin Kaid Saleh Audiovisual School are supported by the Bertha Foundation. 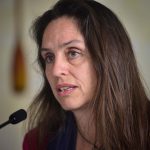