Bertha hosted members of the 30-year-old Triangle Assembly Network from more than 22 countries as they shared their programmes and visions through direct discussion and Skype interactions at Boshchendal in June 2016. The farm’s beautiful rural surroundings as well as the comfortable accommodation and state of the art meeting spaces all contributed to a very successful interaction – the network’s first international gathering after many years of bilateral interactions.

The week-long engagement, entitled ‘Taking Stock: Holding the Network’, allowed participants to assess the impact of network’s collaborative artist-led workshops held over the last three decades, and facilitate debate about their future. This meeting to ‘take stock’ was hosted by Thupelo Cape Town Assembly, a non-profit member of the Triangle Network, held together by well known artists and curators such as Lionel Davis, Garth Erasmus, Ndikhumbule Ngqinambi and Jill Trappler.

One participant, Thembinkosi Goniwe, South African artist and curator, summed up the workshop in the following manner:

‘The way the event at Boschendal was set up made it much more grassroots and focused on the practical details of operating the kinds of programs we are all involved in. Comparing knowledge and methods was invaluable … It was extremely enlightening and motivating to see what great work has been accomplished and achieved in each specific context…. establishing and renewing relationships across the network opens up amazing possibilities, which Boshchendal so efficiently set in motion’.

Access to Boschendal’s state of the art technology also facilitated the participation of those who could not make the long journey to South Africa. The programme, which included presentations, interaction and interviews, brought members from as far afield as Pakistan into the room via Skype.

The Triangle workshops and programmes, run by the various not-for-profit art centers and residencies represented at the meeting, typically involve a methodology for artistic interaction, exchange and experimentation. They are driven by the values of openness and diversity, and are usually held in inspiring physical spaces.

Some workshops have taken advantage of the local environment and engaged with it in developing site-specific work. For example, a workshop in Zambia allowed artists to respond to the environment by producing work which spoke of the environmental challenges, using local materials.

Lionel Davis, artist and a trustee of Thupelo network, is an ex-political prisoner who started drawing while under house arrest in the 1970s. He gained access to the Triangle workshops, which greatly enhanced his skills and confidence. He sent a message to the group displaying the same enthusiasm shown when he first started attending the workshops.

Founded in upstate New York in 1982 by sculptor Anthony Caro and philanthropist Robert Loder, the model has spread far and wide through a network of non-profit visual art organisations in countries such as Botswana, Kenya, Namibia, Zimbabwe, Madagascar, Tanzania, Bolivia, Bangladesh, France, United Kingdom, Zambia, Pakistan, Canada, the United States, Wales and South Africa. Workshops are complemented with exchange, residency and outreach programmes, and collaborations enabling artists to participate in exhibitions and art fairs both locally and abroad.

Bill Ainslie, well known artist, educator and humanitarian who started many diverse art programmes and institutions during the dark days of Apartheid, was instrumental in starting the workshops in South Africa. ‘The workshops’, explained Ainslie before his untimely death, ‘exist for the correction of the artist and to protect the artist from the pressures of professionalism and commercialism’.

Triangle France described the special place these art centres and their activities occupy:

‘These artist-run spaces are where structure and activities display a perfect alternative to the power inequities of the art world; they operate outside the market, independently funded and avoiding bureaucracy and supporting artists as a peer network on a global scale’.

Recent artistic endeavours of the network include performance, video, photography, printing, and collage. Njelele Art Station in Harare, for example, works from a functioning informal vehicle repair garage where performances take place. In this male dominated space, Nancy Mteki exhibited her experimental self-portraits showing herself as a single parent facing difficult times. Her naked portraits created an intervention where her body became a site to explore issues of taboo. The portrayal of this relationship between domestic and public space led to a dialogue with the male mechanics also working in the garage space.

Greatmore Studios in Cape Town, a member of Thupelo, has hosted workshops which enable the local community (Woodstock) to participate in a programme of identity creation. Other workshops assist artists in the use of multi-media and found objects. Prior to the Boschendal workshop, Thupelo held discussions with local curators and artists at Greatmore Studios.

Abiding themes of the workshops include sharing by doing, and working in spaces with a broad range of artists from diverse backgrounds, often dealing with the complex socio-economic issues in the immediate environment. In Marseilles, the themes of migration and immigration recur in the work. The Bag Factory in Fordsburg, Johannesburg, has been the creative space where many important South African artists began their careers. David Koloane, for example, is revered for his work depicting human rights transgressions and urbanization. He, along with other well-known South African artists, has both gained from and contributed to the workshop model.

The week-long discussions at Boschendal concentrated on managing and funding art centres so that they can become sustainable, the challenges faced by administrators, governance, the role of the government and local authorities, not-for-profit registration, and advancing professionalism amongst artists.

The form and role of exhibitions and the recurring themes of race, class, gender and the issues of intergenerational transfer of visual literacy were engaged with much energy.

In addition to this the role of curators, public and private art collectors and the linkages to these initiatives were compared across countries represented at the Boschendal workshop.

Since 2008, many of the organisations involved have faced increased funding restraints and have had to curtail programmes and find more resource-efficient ways of operating. The centre in Marseille, France, for example, which occupies an old cigarette factory, has found innovative ways to partner with the local authority by accessing the youth subsidy for their young artists.

The most abiding concern expressed at the workshop was the aspiration to remain authentic and closely linked to growing young artists through the initial vision of the workshops. Robert Loder, founder of the workshop, noted in a message that although new mediums have been incorporated into the workshops (video, performance and sound) the basic formula has not changed. This is that ‘artists learn from artists’ when they get the opportunity to meet up, and that they discover deep affinities even if they are from opposite sides of the globe.

The Boschendal meeting was convened by Thupelo, Cape Town, was made possible through generous support form the Bertha Foundation, as well as other private donations. 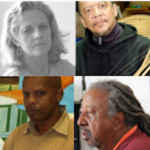