In 1965, the government of Indonesia was overthrown by the military. In less than a year, the army killed more than one million alleged communists, ethnic Chinese, and intellectuals. “The tragedy of modern Indonesian history lies not just in the army-organized mass killings of 1965-66,” writes John Roosa, “but also in the rise to power of the killers, of persons who viewed massacres and psychological warfare operations as legitimate and normal modes of governance.” In 2012, filmmaker Joshua Oppenheimer released his debut feature film The Act of Killing. This documentary explores the memories and imaginations of the perpetrators, offering insight into the minds of mass killers. In his companion piece, The Look of Silence, which Oppenheimer delivered two years later, a family of survivors discover how their son was murdered, as well as the identities of the killers. Bertha Foundation supported a screening tour in the UK for The Act of Killing and provided production and outreach support for The Look of Silence.

When we launched The Look of Silence and The Act of Killing before it, we always wanted to get the films out as far and as wide as possible – in Indonesia and in the world – and to make a real impact. And we knew that we wanted, if possible, to feed into the debate the films would generate in the public spheres in the US, Indonesia, and elsewhere, in order to highlight how the Indonesian genocide is essentially a universal issue, and not a specifically Indonesian event.

I should mention that “we” here refers to the entire film team, including many Indonesian collaborators, our team at Final Cut for Real in Denmark, our sales agent Cinephil, our distributors in the US – Drafthouse and Participant Media – and behind us the financial supporters of the films, including Bertha Foundation. And of course Joshua Oppenheimer, the films’ director.

We also knew that our starting point in Indonesia was denial of any wrongdoing on the part of the perpetrators, and – even worse – an official celebration of the killings – as can be seen in The Act of Killing.

In August, 2012 – the same month as The Act of Killing world premiere – a report by the Indonesian National Human Rights Commission called for criminal investigations into the purges. The report was rejected by the Indonesian government, and our Indonesian premiere and the first wave of screenings of The Act of Killing in Indonesia were closed for fear of attacks by the military, police, and their associated paramilitary groups.

Throughout the US release of the The Act of Killing in 2013, we worked hard to ensure American audiences were aware that the US aided the genocide in Indonesia. But we also wanted to use the opportunity of the film’s release to learn more about how the genocide occurred. There are classified documents in the American archives that can shed light on these events, so we identified declassification as one of the key targets of our campaign in the United States. This was not merely about historical interest, but also because we cannot ask Indonesia to address its issue of impunity and lack of accountability without also addressing the US responsibility as well as other Western countries.

During the Oscar campaign for The Act of Killing we began working with Senator Tom Udall (D-NM) on this issue, and he introduced a Senate Resolution calling for the release of all American documents pertaining to the mass killings. Thus, when The Look of Silence was shortlisted and later nominated for an Oscar, we had another opportunity for advocacy.

With the help of Bertha Foundation we were able to invite Adi Rukun, the main subject followed in The Look of Silence, to come to the US – and especially to Washington, DC, together with Joshua Oppenheimer – both before and during the Oscars.

During the first visit, Adi Rukun, Joshua Oppenheimer and Carolyn Henderson from Participant Media met with staff from the Senate Foreign Relations Committee (Senator Cardin’s staff), House of Representatives Tom Lantos and the? Human Rights Commission (Rep. McGovern staff), State Department (Desk officers covering human rights issues in Indonesia and SE Asia, Preventing Genocide and Conflicts, Preventing Religious Conflicts), as well as Assistant Secretary Tom Malinowski. The purpose of the meeting was to urge leaders of Senate Foreign Relations Committee, Tom Lantos Human Rights Commission, and the State Department to press for the declassification of documents related to the 1965-66 Indonesian genocide, and to position the US as the leader on truth, justice and reconciliation in Indonesia.

The State Department suggested to Human Rights Watch that the Obama Administration would be likely to consider declassification in response to a formal request from an Indonesian human rights commission or truth and reconciliation commission. Immediately we set to work in getting the National Human Rights Commission of Indonesia to draft such a letter to President Obama, and to deliver it to the US Ambassador in Indonesia.

Just before the Oscars, the Indonesian National Human Rights Commission delivered its letter to President Obama requesting declassification to the US Ambassador. Then, right after the Oscars, we made a second trip to Washington with a delegation of National Human Rights Commissioners, as well as a human rights campaigner from an Indonesian human rights NGO.

During the second visit, we delivered a copy of the letter to National Security Council staff at the White House, and then had several more meetings with the State Department. These included another meeting with Asst. Secretary of State Tom Malinowski, where we discussed how the US government can help Indonesia in the reconciliation process by building transparency in both countries. Other meetings were with Tim Niblock (Office of International Religious Freedom International Relations Officer), the State Department’s East Asia and Pacific Affairs staff about minority issues, and James Carouso (Director of the State Department’s Office of Southeast Asian Affairs).

So what has happened since then? In April, in response to our work in February and March and over the past three years, the Indonesian government held its first official dialogue on the 1965 genocide – a two-day government-supported symposium, “Dissecting the 1965 Tragedy: An Historical Approach”. This was an unprecedented public forum for discussion about the details of the atrocities. Here is a quote from Indonesian researcher Andreas Harsono describing the event:

I’ve spent the last two days in a Jakarta hotel listening to more than 20 hours of recollections of Indonesia’s most sensitive, taboo topic: the state-orchestrated 1965-66 massacres that killed more than 500,000 people….The symposium allowed Indonesians to hear an alternate account from survivors of the killings and family members of the victims. They described crimes by government security forces and paramilitary groups under their control, including mass executions and kidnappings, rampant rape and unlawful detention. They described how the government extended the injustice of those crimes through decades of discrimination against an estimated 40 million surviving accused ‘communists’ and their descendants.

There are many opinions about where this symposium can lead. On the one hand, Indonesia’s security minister Luhut Panjaitan has said there will be no truth commission, and no national apology. Yet in response, the President ordered Mr. Panjaitan to begin gathering data on mass graves – essentially launching an official and presidentially mandated investigation into the atrocities for the first time in history.

Whatever the result of this investigation, the truth is coming out. People are now sharing their stories, and even if there is no formal truth commission, no formal reconciliation process, a national reckoning is at hand. Even the government seems to recognize that the issue will not go away.

On April 26, the New York Times reported the following news: “JAKARTA, Indonesia — Indonesia’s president has instructed his government to investigate one of the country’s darkest periods, the bloody anti-Communist purges of the mid-1960s, perhaps ending decades of official reluctance to confront the military’s killings of hundreds of thousands of people.” 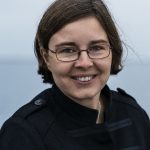 Signe Byrge, Producer of The Act of Killing andThe Look of Silence.