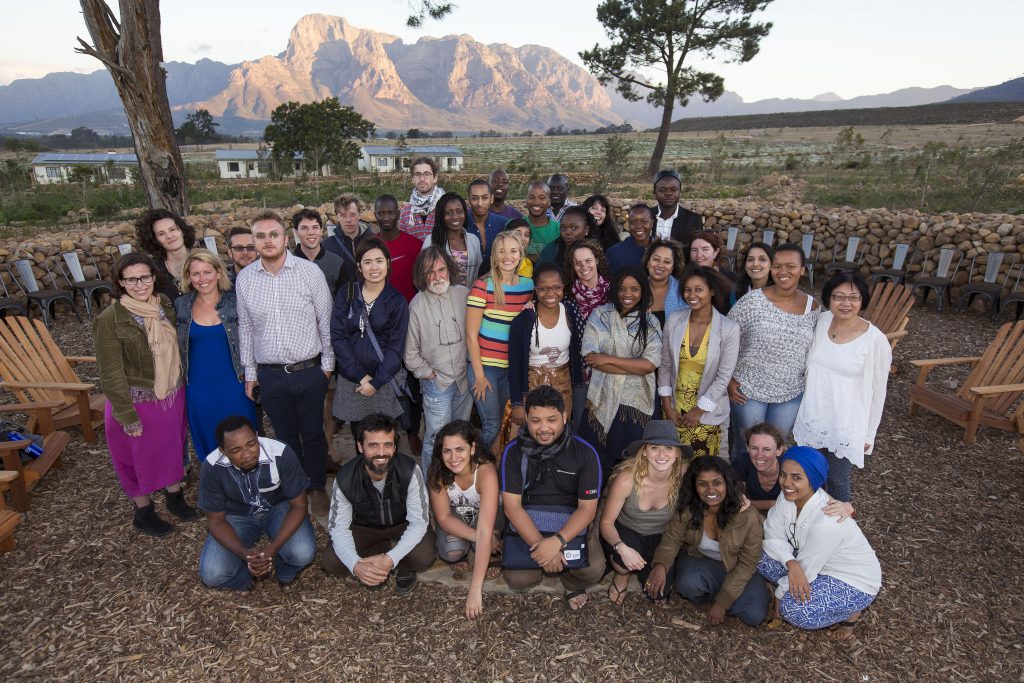 Fellows and alumni from South Africa, India, Chad, Senegal, the US and Germany came together to meet, learn and exchange. Unfortunately, our fellows and colleagues from the Palestinian Center for Human Rights were unable to come due to travel restrictions imposed by Israel. The injustice of this situation was a central focus of the week, along with discussions about how we could best express solidarity with our colleagues. The result is this statement of support. The Bertha Foundation remains committed to providing opportunities to young human rights lawyers in Gaza and will continue to endeavor to bring them to our events.

The week began by helping to locate fellows in their surroundings with a talk about the history of Boschendal and the winelands hosted by Barbara Hogan, former politician and political prisoner, who advises the Bertha Foundation. Rick de Satgé, a lifelong rural activist and renowned authority on rural issues, explained how land reform is the single biggest failure of South Africa’s new democracy. Zackie Achmat, a renowned activist well known for his courageous HIV/AIDS battle, provided analysis of the judgments of Chief Justice de Villiers whose family owned Boschendal for over a century, showing how he was prepared to defend the liberty of the individual, but refused to address equality.

This was followed by a session on activism in South Africa, viewed through the lens of recent student movements, Rhodes Must Fall and Fees Must Fall. Fellows heard from Paula Ensor, head of Tshisimani Centre for Activist Education, which was recently established with Bertha Foundation support, and Tshisimani fellows Ramabina Mahapa, Masixole Booi and Phindile Kunene. They spoke about the origins of and principles that inform these two important movements and how both reflect a growing black consciousness and disaffection with progress towards ending racism and endemic inequality in post-democracy South Africa.

Fellows had the opportunity to hear talks from key figures from the Be Just network. Ka Hsaw Wa from EarthRights International told of how, after a harrowing experience of arrest and torture, he participated in the student uprisings in 1988 and then commenced the investigation into abuses by a transnational corporation, Unocal, which later became the first case litigated under the Alien Tort Claim Act in the US – a case that also led to the creation of EarthRights. While recognizing the challenges that he has experienced working with lawyers, Ka Hsaw Wa emphasized the importance of how Bertha fellows can use their specialized skills to build power in movements and local communities.

Right Livelihood Award Laureate, Jacqueline Moudeina, spoke to fellows about her inspiring two-decade long struggle to bring Hissen Habre to justice for the abhorrent crimes he committed as dictator of Chad. Her legal and advocacy campaign took her from Chad, to the courts of Belgium, to the United Nations, to the International Court of Justice, and to the African Union. Ultimately, as a result of her tireless work, Habre is now being tried before a special court in Senegal, becoming the first-ever African dictator put on trial for international crimes in an African court. The verdict is due on 30 May 2016.

This major achievement was not without significant personal risk and suffering: Jacqueline told fellows about how she survived an assassination attempt, which left her in hospital for almost a year, and the continuing security risks she has faced ever since. The legal profession in Chad shunned and dismissed her work. Meanwhile, her family – concerned for her safety – begged her to stop. But for Jacqueline it was a matter of duty: she was inspired by the courage of Habre’s victims and the precedent it would set for Africa. “When small people like me can sue and bring this powerful man into court, I knew it would deter other African leaders. I felt it was my duty to Africa,” she said. She emphasized the commitment and tenacity fellows need in their career.

Fellows also benefited from skills sessions in law, media and activism – reflecting the Bertha Foundation’s theory of change, our program areas and the three elements that come together in the practice of movement lawyering. In the law session, we debated the advantages and challenges of bringing local struggles to the global stage by reference to the recent international and cross-jurisdictional casework of our partner organisations CALS, ECCHR, ATPDH and ERI. In the media session, fellows received practical training on how to engage with the media from Bertha grantees Right To Know and GroundUp. In the community engagement session, fellows discussed the differences between movement lawyering and the “traditional” rules about attorney-client relationships based on the notion that ‘the client’ is an individual or corporation, as well as the challenges of lawyers working with large social movements and often divided communities. 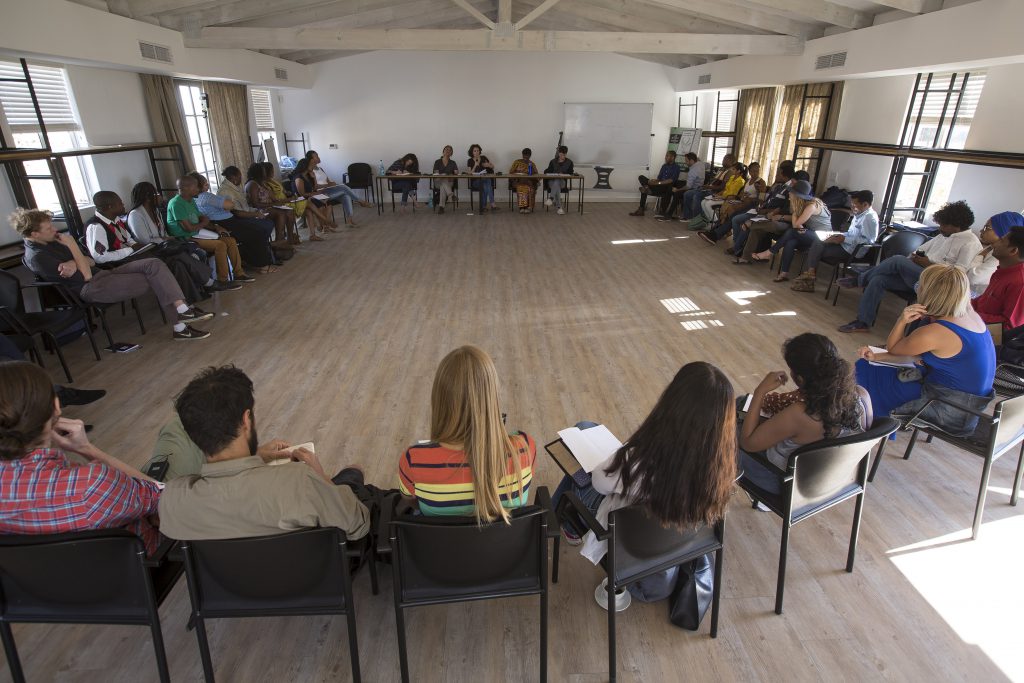 Each evening we hosted film screenings of Bertha-supported films, followed by discussions about the legal issues covered in each film, legal advocacy strategies and how film can be used as a tool for change. Fellows saw Dear Mandela, with director Dara Kell and Stuart Wilson of SERI discussing the housing rights movement and litigation strategies.  Dirty Wars was followed by a discussion with Bertha fellow Omar Shakir who worked on Stanford’s Living Under Drones report with our Bertha partner, the Foundation for Fundamental Rights in Pakistan. Andrew Feinstein also spoke about his work uncovering the global arms trade and his new film, Shadow World, which just premiered at Tribeca Film Festival. Finally, I hosted a discussion after Big Boys Gone Bananas!* about how powerful interests act to censor public interest reporting, my experience defending Wikileaks against similar attacks and strategies fellows can use in their own work when confronting these problems.

We think it is essential, when bringing fellows from around the world to South Africa, to allow them to see the social justice issues we discuss in their context. To this end, exchange visits were held in Khayelitsha with Bertha grantees, Social Justice Coalition and Equal Education Law Centre, where fellows from around the world learned about the work of both organisations and shared insights from their work at home.

The week concluded with a dinner talk from Justice Edwin Cameron who spoke to Bertha fellows about our agency as lawyers in transformation. Reflecting on his own work as a human rights lawyer during apartheid, Cameron spoke passionately about the opportunity South Africa’s Constitution now provides to lawyers to contribute to social change, in particular for LGBT rights. He focused on the civic dignity constitutional recognition and protection provided him personally as a gay man, but also for the most vulnerable LGBT communities. His talk was followed by an engaging discussion with fellows about constitutional interpretation and frustrations about judgment implementation. Citing this article, Cameron’s critique of the originalist approach to interpretation – as merely reinforcing privilege and discrimination and being inimical to progress towards social justice – was, for me personally, a highlight of the week.

Fellows reported coming away from the week feeling inspired by the lawyers and Bertha fellows they met from different parts of the world, as well as being rejuvenated and excited about their future career in this work. For some, it was “life-changing”. As one fellow remarked, “I gained a renewed hope in the fight for social justice and the advancement of human rights”.

For this reason, global convenings and opportunities for exchange on thematic work issues will remain a central part of Bertha Justice Initiative programming.

We would like to thank, in particular, our colleagues Lisa Chamberlain from the Centre for Applied Legal Studies and Claire Tixeire from the European Center for Constitutional and Human Rights, for the assistance they provided in developing and leading the program.