A ball that breaks through boundaries

At the Bertha’s Women´s Gathering in Berlin in October 2014, I strongly identified with the stories and ideas shared by the amazing women human rights lawyers in the Bertha Network. The Women’s Gathering helped me to realize the extent to which the silencing of women is normalized in many different countries, cultures and contexts, and to reflect upon my own experiences of that normalization.

As a young women lawyer from Colombia, based in Peru with EarthRights International, I have faced many different challenges. Part of my work is based in the field, where I have the opportunity to see the cases we support first-hand and be directly involved with the work. EarthRights has local partners from each community, which makes it easier for us to enter community territories. But do these local partners allow men and women to be heard equally? Usually not: local leaders tend to be men. This has implications for the participation of local women in community discussions and decision-making, but also for me as their lawyer – as a woman and as an outsider. For community lawyering to work, we have to consider a number of factors: how do you break down the wall between you as the lawyer and the members of the community? How do you gain their confidence so you can have a clear understanding of the situation and their case? How do you create a space for the “silenced” voices of the community so they can be heard? Women are often among those “silenced” voices.

I want to share my experience of using a tool that worked in two different contexts to help me break down the barriers that existed between me – both as a lawyer and as a visiting woman – and the community. My tool was a sport: soccer.

During two separate visits to two very different communities in the Andes and in the Amazon, I decided to play soccer with the local communities. The villages were very similar in terms of their populations, the dominance of agricultural work, and the rivers running alongside them. However, the environment and the culture in the two places were totally different.

The first match that I played was in the highlands of the Andes. The playing field was made up of dust, small rocks and two wooden goals. Both of the teams were exclusively male. As the sun was setting, and most of the community was looking on, I asked if I could play. It was apparently an awkward question for them but while they were figuring out how to answer, I just jumped onto the field. I was totally ignored for the first 5 to 10 minutes of the match. But then I started to get really involved in the game and became part of the team! I was pleased with how I played – passing, intercepting and shooting the ball well. It was a tough match because, from the very start, I faced an added challenge: the assumption that I was not capable of playing the sport. Nonetheless, it was memorable to see how my teammates celebrated when they realized that I could play. Local women came at the end to speak with me – surprised that I was playing sport at all, to which I answered: ‘Soccer is for everyone. You should try it, it’s really fun!’ After the game, the men also started to open up and engage with me and we spoke about a whole range of subjects.

The second match was in the Amazon rainforest in an indigenous community. The field – made of concrete, totally spartan, with metal goals – was the center of attention. The men had finished their match and I thought that my chance of playing was over. Suddenly the indigenous women took to the field – it was their turn to play. I was part of a team of 7. After the first 15 minutes I was dying; the heat was unbearable for me, even though the locals continued playing with ease, full of energy. Finally, my team scored two goals and won the match, but most importantly we had fun and bonded as teammates. My participation in the match helped to bring me closer to the community, just as it had in the Andes. They invited me to enjoy Masato with them – a traditional drink made with yuca used commonly in their festivities- and the women spoke to me about their daily lives, their families, their education and the decision-making processes in their communities. Playing soccer together helped open up a range of conversations that allowed us to better understand each other.

Ultimately, I realized that soccer is one of the universal languages, which can – like other tools – be used to break through cultural boundaries and allow people to recognize each other as equals. I may have played in two very different places and contexts but in both cases soccer allowed me to feel a stronger bond both with the people I played with and with those who watched the match. Soccer helped to overcome the prejudice I came up against, as a woman and an outsider, in ways that I never expected. 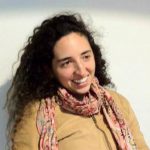 Camila Mariño
Bertha Fellow at the EarthRights International in Peru